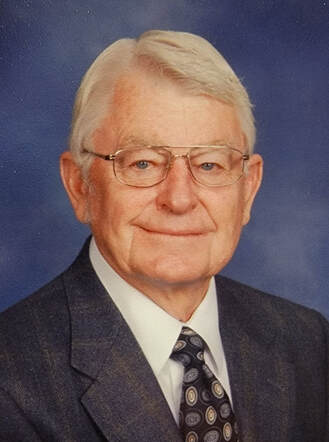 Dale Alvin Olson, age 90 of York, Nebraska, died on July 2, 2022 in York. He was born November 30, 1931 in York to Alvin and Hazel (Foster) Olson. Dale grew up on the family farm that was founded in 1917. He attended York Public Schools, graduating in 1949. He then attended the University of Nebraska and graduated with an agricultural major, where he was also a member of the Alpha Gamma Rho Fraternity. He married Janet Robertson on June 19, 1955 in Imperial, NE. Dale was in the Air Force ROTC and served our country in the United States Air Force for two years.

In 1956, he and Jan returned to the family farm and raised dairy cattle, Poland China hogs, had a cattle feedlot, plus raised corn, beans, and alfalfa. He gave back to his community by serving on the York County Fair Board, Nebraska State Fair Board, and a York School Board Member. Dale was inducted into the York County Agriculture Hall of Fame in 2020.  He was a lifetime member of the First Presbyterian Church in York, where he served as an elder and deacon. Dale was a true Husker Football fan, enjoyed attending his grandchildren’s activities, playing cards, attending polkas, and traveling.

Memorial services are scheduled for 10:00 am, Saturday, July 9, 2022 at the First Presbyterian Church in York with the Reverend Dr. Michael Eickhoff officiating. Graveside services with military honors will be held at 1:00 pm that afternoon at Greenwood Cemetery in York. Dale has been cremated. No viewing or visitation. Memorials may be directed to York County 4-H, First Presbyterian Church, or donor’s choice.