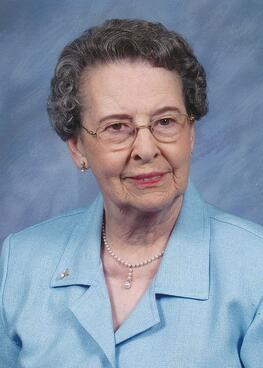 She was born July 21, 1917 at Lushton to Edward and Myrtle May (Smith) Franz. She was united in marriage to Eddie Larson on June 1, 1941. She owned and operated the Credit Bureau in York. Dolly was a fifty year member of both the First United Methodist Church in York and the Eastern Star. She was a member of the American Legion Auxiliary, Lamplighter Extension Club, the York Red Cross Bloodmobile and a life member of York Hospital Auxiliary.

Funeral services will be held at 2 p.m. Friday, April 8, 2016 at First United Methodist Church in York with the Reverend Art Phillips officiating. Interment will be in York’s Greenwood Cemetery. Visitation will be one hour prior to the funeral service at the church. Memorials may be directed to Greenwood Cemetery in York, First United Methodist Church or the family for later designation.​