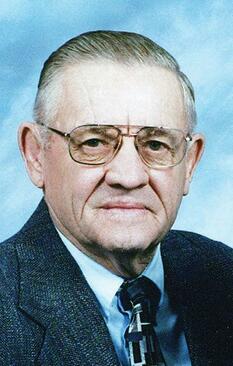 Clarence Friesen, age 94, of Henderson, died Friday, June 9, 2017 at Henderson. He was born Jan. 22, 1923, to Jacob F. and Lena (Kroeker) Friesen. He received his first eight years of formal education at the #62 country school, and four years of high school at district #95 in Henderson. On April 25, 1947 he and Phyllis Smith were married. They celebrated 70 years of married life together. This marriage was blessed with three children: Larry Dean, Ronald Dean and Kathleen Ann.
After high school, Clarence worked various jobs, such as drilling irrigation wells, harvesting wheat fields in Kansas and in a local garage as a mechanic. He then farmed for many years.

Clarence and Phyllis built a new home in Henderson, and in February 1985 they retired from farm life and moved to town. He then enjoyed his friends by going to coffee twice a day. He also found a hobby of wood working and expounded this by making many items for his family and he made and donated many items for the yearly MCC Sale in Aurora.
Clarence was a huge sports fan and in their earlier years they enjoyed attending Big Red football and basketball games, and gymnastics at the University of Nebraska.

He is survived by his wife, Phyllis of Henderson; son, Larry (Ellie) Friesen of Lincoln, Ronald (Joyce) Friesen of Aurora and daughter, Kathy York (Tom Frey) of St. Peters, Mo.; grandchildren, Michelle (Keith) Kennedy of Johnstown, Colo., Holly Bailey of Lincoln, Shawn Bailey of Henderson, Rick (Brittany) Friesen of Omaha, Joel (Mary) Friesen of Lincoln, Nate (Amie) Friesen of Aurora and Dustin (Jody) Friesen of Sutton; great-grandchildren, Allison (Lowell) Wellman of Henderson, Drew (Jesse) Kennedy of Johnstown, Colo., Greyson, Maya and Josie Friesen of Lincoln, Caleb and Morgan Friesen of Omaha and Ashley and Kyle Bailey of Henderson and eight great-great-grandchildren.
​
Preceding him in death were his parents; brother, Raymond; brother-in-law, Lyle Smith and son-in-law, Robert York.
Graveside services are scheduled for 9:45 a.m., Thursday, June 15, 2017 at the Bethesda Mennonite Cemetery in Henderson. Memorial services will follow at 10:30 a.m. at Bethesda Mennonite Church in Henderson. The Reverends Jim Voth and Andrea Wall will be officiating. Visitation will be held from 5 – 9 p.m. Tuesday, June 13, 2017 and all day Wednesday, June 14 with family greeting friends from 7-8 p.m. Wednesday evening at Metz Mortuary in Henderson. Memorials may be directed to the Bethesda Radio Fund or to MCC.