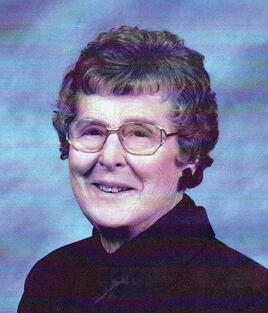 Clara was born July 21, 1923 in rural Hamilton County to Jacob D. and Helena (Peters) Janzen, the seventh of 10 children.

Clara attended the District #73 East school, graduating in 1941. Upon her confession of faith, she was baptized into membership at the Bethesda Mennonite Church and was a faithful member there until her death. She taught Sunday School, participated in the church Mission Circle activities and also enjoyed helping with the MCC Meat Canner Operation and volunteering on a trip to Reedley, California to assist MCC with the fruit drying process.

Clara and Harry D. Ratzlaff were married on Nov. 2, 1943; together they spent most of their married life farming in the Hampton/Henderson area. Born to this union were two children, Cheryl (Quiring) and Calvin Ratzlaff.

To assist with the family income, Clara worked as a clerk at the local grocery stores, Epps Grocery and later at Friesen IGA and eventually began teaching herself secretarial skills. This led to a secretarial position at Central Irrigation and Fertilizer in Henderson where she worked for 21 years.

Harry and Clara retired from their farm in 1982 and relocated to the town of Henderson. In 1983, they celebrated their 40th wedding anniversary. Years later she volunteered at the Henderson Care Center for 14 years, assisting with the evening meal routine for the residents. In August of 2008, she became a resident of the Henderson Care Center and remained there until her death.