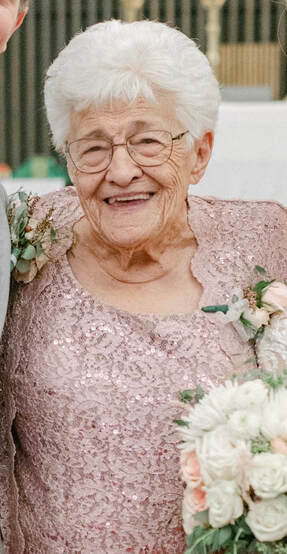 Christine Theresa (Morse) Tonniges, age 85, of York, NE, died Tuesday, November 8, 2022 in York. She was born on January 4, 1937 to Frank and Ellen (Lawlor) Morse in the Bronx, NY.  She graduated from Cathedral Highschool in the Bronx.  She was united in marriage to Lawrence Osterhoudt, to this marriage four children were born-Timothy, Kevin, Frankie and Theresa.  In 1973, she moved to Barton’s Glen, Pennsylvania before settling in York, Nebraska in 1976.  On May 27, 1979 she was united in marriage to Eugene “Pops” Tonniges.

Chris was a long-time member of St. Joseph Catholic Church in York. She was a hard worker, spending most of her life working in the food service industry in management. Before retiring she managed the Camelot, the Legion Club and the Elks Clubs in York.  She also enjoyed her many volunteer activities including the York Lions Club, CASA, Blue Valley, the Special Olympics and Aseracare Hospice.  Christine volunteered at many different places that it would be difficult to list them all, but her favorite would be as a Foster Grandparent at York Elementary School.  Each of the children she worked with held a special place in her heart. She was a proud member of the York Elks Club, in which she was very involved and the York Eagles. She never met a stranger, loved to laugh and always had a good story to share.  She loved good music, good company and a good scotch or glass of wine.

She is survived by her children Timothy (Kim) Stephens of Omaha, Kevin (Kimberly) Stephens of York, Theresa (Lee) Christiansen of York, her sister, Joan (John) Joyce of Garnerville, NY, sister-in-law Stephanie (Frank) Morse of Sloatsburg, NY, seven grandchildren and their spouses, four great-grandchildren, many nieces and nephews, and her adored cat, Angel.
She was preceded in death by her parents, her husband Eugene, her son Frank Kevin, her  brother Frankie Morse, and her special nieces Eileen Greene and Patricia Joyce.

A Mass of Christian Burial is scheduled for 10:00 a.m., Friday, November 11, 2022 at St. Joseph Catholic Church in York. Inurnment will follow at Greenwood Cemetery in York. Christine was cremated, there will be no viewing or rosary. However, a visitation will be held from 1-8 p.m. on Thursday with the family greeting friends from 6-7:30 p.m., at Metz Mortuary in York. Chris’s service will be live streamed on Metz Mortuary’s Facebook page. Memorials may be directed to  Special Olympics or CASA.
​
Condolences may be emailed to Metz Mortuary Messages will be given to the family.
Find our featured Mortuary in Family Services, Funeral Services and Grievance Services featured as a York, Nebraska Business in York Marketplace.
Location: Metz Mortuary | 109 South Lincoln Ave | York, Nebraska 68467 | Phone: 402-362-3351