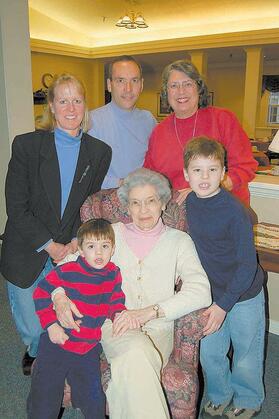 She was born on Dec. 13, 1916 in Alexandria to Charles Jacob and Anna (Grimm) Dein. Her grandfather, Jacob Dein, had homesteaded the family farm on the banks of the Little Blue River in 1869.

Charline grew up in the 1930’s when times were tough.  As a child, rounding up cobs to heat the house was one of her daily chores. She liked the dry ones, not the ones the hogs had walked on. Charline was also tasked with carrying wood and feeding the chickens.

As a young child, she walked to Country School, which was a mile and a half away. High school was five and a half miles which required her to ride a horse every day. The Little Blue River was one of her favorite places to go when chores were done.  The water was shallow and the sandbars were good for relaxing and getting a tan.  The family raised extra chickens to allow Charline to attend college at the University of Nebraska.

Charline worked as a secretary at City Hall in Lincoln in the City Recreation office and also at the Lincoln Army Air Force Base where she met her future husband, Staff Sgt. Pat Nelson. They were married Nov. 24, 1943 in Lincoln. Following Pat’s discharge from the service, the couple moved to Ceresco and made subsequent moves to Fairbury and Albuquerque, N.M. They settled in York in 1955 where Pat opened Nelson Motors which he sold in 1974.

Charline worked for nine years as a secretary at Desch Monuments, retiring in 1986. She lived on Edison Avenue from 1955 until January 2005 when she moved to Mahoney House which was her home for the last nine years.

Over the years, Charline was active in the Edison PTA, Girl Scouts, and Presbyterian Women’s League Auxiliary and was a member of the York Country Club.

The family is grateful to the caring staff at Mahoney House in York and Hospice Community Care of Nebraska for their support of Charline.

Linda and Bob Nelson will receive friends and family at Metz Mortuary on Saturday Oct. 4 from 9 to 11 a.m. A graveside service will be held at the St. Joseph Catholic Cemetery at 11:30 a.m. on Saturday, Oct. 4.   Contributions may be made in the name of Charline Nelson to the York Public Schools Foundation where they will be used to benefit public education or for the new Home Field Advantage project.​​