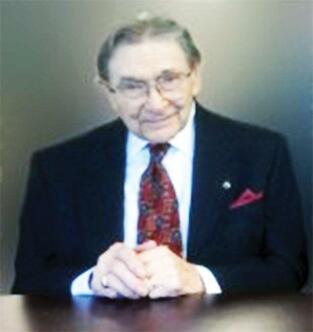 Often going by his initials C.M. Wempe, by some close to him he was Charlie, to others he was simply “Doc”. Born Aug. 30, 1916 on the family’s Riverside Stock Farm northeast of Seneca, Kan. he was the fifth child of ten born to Clement Henry and Josephine (Eigenman) Wempe.

Following graduation from St. Peter & Paul’s Catholic School in Seneca, he entered Kansas State University in September 1937. His schooling was interrupted by the outbreak of WWII and he entered the naval service in January of 1942.

After earning his wings, he served in the North Atlantic Theater logging more than 3000 hours of anti-submarine surveillance and air/sea rescue missions before his assignment as a Naval Flight Instructor at Pensacola, Fla. While serving, he married the love of his life, Helen Josephine (Huber) of Seneca, Kan. at St. Michael’s Catholic Church in Pensacola on July 3, 1944.

Returning to Kansas State following the war, he earned his Doctorate in Veterinary Medicine in May of 1949, becoming one of an eventual fourteen in the Wempe clan to make Veterinary medicine their professional calling. After practicing a short time in Seneca, Charles moved to York establishing the York Veterinary Clinic on May 23, 1950. Dr. Wempe’s practice in veterinary medicine spanned more than a half century.

His long running memberships and involvement in various organizations, achievements, awards and accolades received ranged from religious to professional, fraternal, educational, civic, political and recreational. Impossible to list all of them here, an abbreviated list would include:

Member of the American Veterinary Medical Association (AVMA). He was a member of and held all offices including President of the Nebraska Veterinary Medical Association (NVMA) in 1979. NVMA Veterinarian of the Year award 1982. Recipient of the NVMA Builders Award. More than 75 year member of Knights of Columbus. Fourth Degree Knights of Columbus. Acolyte for St. Joseph’s Catholic Church and served on the St. Joseph Church and School Boards. Served eight years on the State Board of Health.

Counsellor for Animal Care and First Aid merit badges for the four local area Boy Scouts of America troops and Religious Activity Chairman for troop #174. Designated as a Knight of Ak-Sar-Ben. Member of National Cattlemen’s Association, Nebraska Livestock Breeders Association, York County Feeders and Breeders Association and York County Pork Producers. He testified at many legislative hearings in support of the NVMA, livestock and agriculture interests. He was an 11 year member of 4-H as a youngster and a booster as an adult. Member of the American Legion, Benevolent and Protective Order of Elks (BPOE), Phi Kappa Theta Fraternity, Izaak Walton League, York County Historical Society, York Country Club and named Yorkfest King 1999.