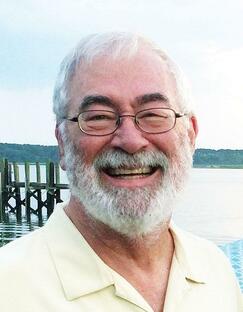 He was born April 3, 1949 in Chicago, Ill. and adopted by Elijah Levitt and Lorraine (Vodehnal) Levitt of York. He became part of a wonderful, caring family.

Charles graduated in 1967 from York High School. He followed in his father’s footsteps by attending Ohio Wesleyan University. After graduating he served two years in the Army and then completed his Master’s degree at Ohio State University.

Charles enjoyed talking with people about books and movies, which led to he and his wife opening a Little Professor Bookstore in Omaha. Charles became acquainted with many authors especially mystery writers.  He was chosen to host the World Mystery Convention in Omaha.

Charles first met his wife, Rose Marie Peterson, in kindergarten as he would like to tell people. In 1970 they married and had three children: Shana, Elijah and Katharine. Charles also has two granddaughters, Harper and Norah, who provided hours of enjoyment for him.

He was preceded in death by his father, Elijah Levitt and his mother, Lorraine Levitt.

Charles was diagnosed with Young Onset Alzheimer’s in 2010. Through it all he never lost his love of talking with people and making them happy.

Funeral services are scheduled for 10 a.m., Saturday, April 15 at the First United Methodist Church in York, with the Reverend Art Phillips officiating. Burial will follow at the Greenwood Cemetery in York. Visitation will be Friday, April 14, from 1 – 8 p.m., with the family greeting friends from 5 - 7 p.m. Memorials may be directed to act.alz.org, Walk4Chuck team.​