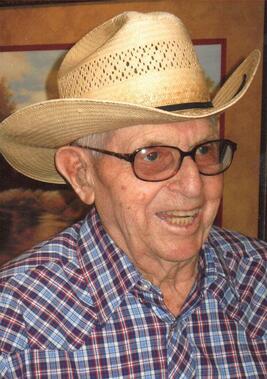 Charles Arthur “Art” Brunk, age 99 of York, died Sunday, Dec. 21, 2014 at York. He was born July 28, 1915 to Herman and Myrtle (Shafer) Brunk in York County. Art was united in marriage to Pansy Carter in Clay Center on March 2, 1939.  Art was a cowboy and rancher, primarily in the Brownlee and Gordon areas of Nebraska. He enjoyed playing cards and dominoes.

He was preceded in death by his parents, wife, one sister, one niece, one great niece and one great nephew.

Funeral services are scheduled for 10 a.m., Saturday, Dec. 27, 2014 at Metz Chapel with the Reverend Art Phillips officiating. Interment will follow at Greenwood Cemetery, York. Memorials may be directed to Willowbrook Assisted Living or Donor’s Choice. Visitation will be held from 1 p.m. – 9 p.m. on Friday, with family greeting friends from 7 - 8:30 p.m. that evening.  ​