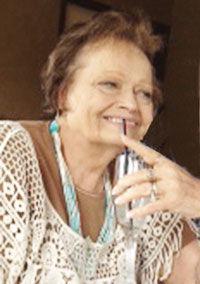 She was born on June 15, 1942 to Hazen and Thelma Smith. Carole grew up in Taylor and attended beauty school in Lincoln. She moved to Milford where she had all four of her children. When her youngest was in school, they moved to Dorchester and she opened Conner Garden and Gift Shoppe.

In 1987 she married Jim Sprague and they made their home in Dorchester.  In 2002 they moved to York, where she resumed her passion of painting and gardening. She took pride in her community and often headed up projects such as planting flower boxes in Dorchester, tending the flower garden at East Hill Park in York, and painting beautiful murals at church.

Carole loved being a part of various church groups, garden club and social coffee groups, and she never said no to going to garage sales or a trip to Hobby Lobby.  Being with family and friends was what brought her the greatest pleasure.

She is survived by her husband Jim of York; her mother, Thelma Hill of York; her children, Brad (Kerry) Conner of McCool Jct., Stacie Conner  and friend Chad Becwar of Lincoln, Steve (Angie) Conner of Seward and Nicki (Erik) Rivers of Lincoln; step- children, Kathie Vocasek of Pickrell and Kristine Briese of Lincoln; grandchildren, Mayson Conner and Morgan Conner both of McCool Jct., Andrew (Jennifer) Crees of York and their children  Joel and Brennen, Sierra Crees and her fiancé Kory Einspahr of Lincoln, Brad Ricenbaw of Cordova, Ashton Conner and Dane Conner both of Seward and Lauren Rivers and Hayden Rivers both of Lincoln and step-grandchildren, Amanda Vocasek and Jordan Sprague of Lincoln.

She was preceded in death by her father, Hazen Smith; sister, Elaine Harris and granddaughter, Conner Rivers.

Memorial services will be held 2:30 p.m., Friday, Nov. 21, 2014 at the First United Methodist Church in York with the Reverend Art Phillips officiating. Memorials may be directed to the church or to the family for a bench to be placed at East Hill Park in her honor. No viewing or visitation.​
Condolences may be emailed to Metz Mortuary Messages will be given to the family.