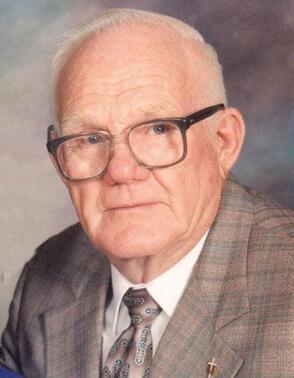 He was born Feb. 12, 1927, to David and Olga (Laudin) Franzen near Exeter. He was baptized at St. John Lutheran Church, south of Waco. His childhood was spent on farms near Exeter, Marquette and Aurora. He graduated from eighth grade and quit school to help with the family farm. When World War II broke out Carl joined the Merchant Marines.

While in training to go overseas Carl contracted scarlet fever. A week later he came down with the mumps. He was hospitalized and was on sick leave for several months. It was after that, that he was deployed to the Panama Canal Zone.  Due to the complications of his health and the end of World War II Carl served only several days of armed service overseas.

He then returned home and lived in Lincoln where he worked, went to school to get his GED, and took confirmation classes. He hitchhiked home to Aurora on the weekends to help with the family farm because his father’s health was failing. It was after he fulfilled graduation requirements that he joined the telephone company and worked as a lineman in Hastings. He was transferred to Tecumseh as a telephone combination man. He met his future wife, Delores, as they crossed paths, she riding the bus from Lincoln to Tecumseh to go home on the weekend and he catching the bus at Tecumseh, to go home to Aurora on the weekends.

He and Delores Woerlen married on Sept. 10, 1950 in Johnson. They then moved to Pawnee City. There the couple had four children:  Diane, Brian, Elaine and Donald. In 1964 Carl and the family moved to York.  Carl began to do electrical work on the side as he continued to work for the telephone company. After 35 years Carl retired from the telephone company and continued for approximately another 20 years as an electrician.

Carl always loved to travel. He vacationed with his family nearly every year; first tent camping then trailer camping. Later in life he and his wife traveled to Europe, the Middle East, Canada and throughout the United States.

Carl loved the Lord and served in many capacities in his church throughout the years. He was a faithful member of the LLL, the Gideon’s and enjoyed men’s Bible study for many years. He served as a Boy Scout leader and other positions with the Scouts. He also loved his grandchildren and enjoyed following them in their activities. Carl had huge gardens throughout his entire married life. He harvested the crops and Delores put up the produce. Carl donated many gallons of blood to the Bloodmobile. He served as a volunteer fireman.

During retirement Carl volunteered with Houses for Humanity and helped build a church in Eagle through Church Extension Fund. Carl used the skills he learned to build a shed in his backyard. Carl loved hunting, fishing, playing cards and going to coffee.  He used those opportunities to develop lifelong friendships.

He also leaves behind nine (with two more to arrive soon) great-grandchildren. Also his sisters-in-law,  Shirley (Zabel) Franzen of Thornton, Colo. and Inez (Woerlen) Gebers of Johnson as well as nieces and nephews.

Funeral services will be held at 10 a.m. on Saturday, Aug. 20, 2016 at Faith Lutheran Church in York.  Interment will be in York’s Greenwood Cemetery.   Visitation will be from 1 – 9 p.m. on Friday at the mortuary with the family greeting friends that evening from 7 – 9 p.m. Memorials may be directed to the Lutheran Hour, Orphan Grain Train or Mission Central.​