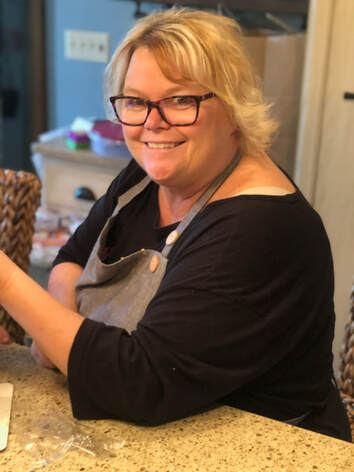 Brenda Lee Scavo, age 59 of York, NE died on Thursday, September 15, 2022 with her family by her side. She was born on October 28, 1962 to Gary A. and Shirley A. (Amick) Stingley in Sioux City, IA. Brenda graduated from Ponca High School in 1981 and then obtained a bachelors degree from UNL in 1986. Brenda was united in marriage to Steven Scavo on September 3, 1983 in Ponca.

She began working in the office of York County Clerk in 1998 and then moved to the treasurer’s office in 2001, being appointed as the county treasurer in 2005 and maintaining this position until her retirement, due to her health. Brenda was a member of the Central District Board from 2010-2016, the NPAIT Board from 2015-2020, serving various roles on the NACO Board, including President, and named Outstanding Treasurer of the Year in 2019. Brenda was also a Leadership York graduate in 2002.

Brenda loved Christmas and their annual 4th of July parties, where she got to showcase her love of cooking. Baking at Christmas time with her daughters Leah and Lyndsay became an annual  tradition, along with her granddaughter Spencer. Brenda was happiest when surrounded by family at gatherings in and around her kitchen.

There are many fond memories of vacations to Colorado, Arizona, Maine, and all points in between. She enjoyed scrapbooking with her daughter Lyndsay and attending scrap conventions together, along with her sister Becca in recent years. Brenda loved supporting and attending her daughter Leah’s stand-up comedy shows. She absolutely loved her family, especially her grandchildren Kadin and Spencer, who were the apples of her eye!

She is survived by her husband Steve of York, daughter Lyndsay (Dustin) Williams and grandkids Kadin Tesar and Spencer Williams of York, and daughter Leah and (Alex) Heithoff of Lincoln, NE. She is also survived by her siblings: Bryan (Nancy) Stingley of Jackson, NE, Becca Stingley of Waterbury, NE, and Bobbie (Jeremy) Bernadt of Lincoln, NE; mother-in-law Susan Scavo of York; sisters-in-law Paula (Terry) Markuson of Omaha, NE and Carol (David) Piper of Hugoton, KS; numerous nieces and nephews, grandnieces and grandnephews, and a host of friends.

She was preceded  in death by her parents and father-in-law John “Jack” Scavo.

Memorial services are scheduled for 2:00 pm, Monday, September 26, 2022 at the Holthus Convention Center with the Reverend Mary Scott officiating. Private family inurnment at a later date. Cremation. No viewing, but the family will greet friends and family from 4-6 pm on Sunday, September 25 at Metz Mortuary. Memorials may be directed to the family for future designation towards sarcoma research.