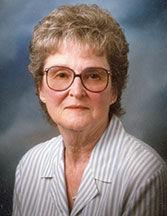 She was born June 22, 1933 at Caddo, Okla. to Joseph and Minnie (Hardage) Parker. Betty was the sixth of eleven children.

Betty was a longtime York General Healthcare employee serving first as a nurse’s aide and then later moved to the Materials Management department for over 30 years.  A member of Peace Lutheran Church Betty loved knitting, crocheting, making quilts for the Orphan Grain Train, traveling and attending her grandkid’s activities. She was married to Charles Edmunds in 1961 with whom she welcomed four children, Paul Marley in 1986 and then to John Seilhan on April 20, 1997.

Betty is survived by her husband John R. Seilhan of Waco; two sons, Gary (Becky) Edmunds of Sebastian, Fla. and Terry (Lou Ann) of York; two daughters, Lori (Boyd) Smith of Lincoln and Dana (Michael) Yamber of Waco; a stepson, Keith (Sheri) Seilhan of Seward and a stepdaughter, Carol Seilhan of Crete.  She is also survived by one brother, Floyd Parker of Phoenix, Ariz.; two sisters, Cora Mae Hudman of Paradise, Calif. and Georgia Whitworth of Glencoe, Okla.; fourteen grandchildren; numerous great-grandchildren; many nieces and nephews and a host of friends.

She was preceded in death by her parents; two husbands; five brothers; two sisters; one grandchild and one great-grandchild.

Memorial services are scheduled for 10 a.m. on Saturday, March 4 at Peace Lutheran Church in Waco with Reverend Charles Ramsey officiating.  Private family inurnment will be held at a later time. It was Betty’s wish to be cremated so there will be no visitation or viewing. Memorials may be directed to Waco Fire Dept. or to the American Legion Post 49 at Utica. ​