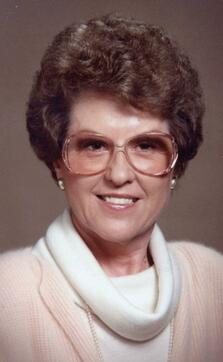 Betty Ann Peters was born at home in rural Hampton, NE to Elisabeth (Friesen) and John Peters on October 9, 1933. She was the second of five children and was baptized and became a member of Bethesda Mennonite Church on May 13, 1951. Betty attended District 15 in Hamilton County through eighth grade and graduated from Hampton High School in 1951. She met Frederick Regier during youth gatherings at church and they were united in marriage on January 2, 1953. They then moved to Topeka, KS where Fred completed his W-1 service at the Topeka State Health Hospital. After service they moved to the Klaus Buller farm near Lushton, NE. Betty is remembered by her husband as “the best wife a man could have.” She became a dedicated housewife and enjoyed gardening, especially pink flowers, keeping an immaculate home and lived by the quote “the essence of life is in the details.” To this union two children were born, Sheila Terese and Monty Scott.

She is preceded in death by her parents, brother Kermit Peters, brother-in-laws Pete Regier, David Regier, Jr. and Levi Regier, and son-in-laws Melvin Janzen and Kevin Huebert.
​
Graveside services will be held at 1:15PM, Saturday, July 1, 2017 at the Mennonite Cemetery, 1 ½ miles south and 3 ½ miles east of Henderson. Memorial services will follow at 2:00PM at the Bethesda Mennonite Church Fellowship Hall due to construction. Visitation will be held from 1-9PM, on Friday, June 30, 2017, with the family greeting friends from 6:00 – 7:30PM that evening at Metz Mortuary in Henderson. Memorials may be directed to the Bethesda Mennonite Church, or to Henderson Health Care.