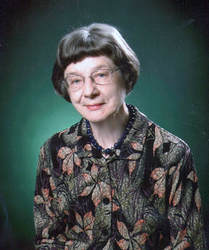 Bertha was a secretary for the Wichita Public Schools in Wichita, KS. She was a longtime member of the Hoffnungsaw Mennonite Church in Newton, KS where she sang in the church choir, taught Sunday school and was Girl Scout Leader. She loved swimming, music, camping, cooking and tending to her flower garden.

​On May 28, 1945 she was married to Vilas Roy Gerber in the Hoffnungsaw Mennonite Church in Newton.
She is survived by her daughters; Kathryn (Myron) Siebert of Henderson and Carol (Richard) Curr of Sonoma, CA. Two grandsons; Jason (Amber) Siebert of Henderson and Joel Siebert of Las Vegas, NV. Great-granddaughters include Delaney and Cassidy Siebert; great-grandson Kaden Siebert. Also surviving is her sister Catherine Wiens of Newton, KS.
She is preceded in death by her parents, husband, granddaughter Jennifer, two brothers and a sister-in-law.
Memorial services were held at 2:00 p.m., Saturday, February 24, 2018 at Metz Chapel in York. Private family inurnment to be held at a later date in the Hoffnungsaw Cemetery in Newton, KS. Memorials may be directed to her family for later designation.