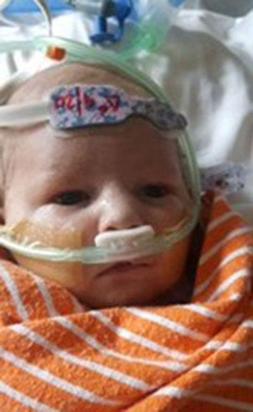 ​After struggling with a congenital heart disease and heterotaxy syndrome, he passed gently into the arms of Jesus. Aydan was born August 16,2017 in Omaha, to Kyle Naber and Heather Ekeler, and the baby brother to Addison.

During Aydan’s time spent in Omaha, he enjoyed showing his personality to the nurses, flirting and giving them the ‘side eye’, quickly becoming a favorite to many of the staff. He enjoyed listening to music, and loved having his parents and sister read to him. He had a collection of elephants, and couldn’t be separated from his pacifier.

​He is survived by parents Heather Ekeler and Kyle Naber of Waco, sister Addison Joy, grandparents Dan and Kathy Ekeler of Fairmont, Wayne and Joan Naber of Waco; great-grandparents Colleen Ehmen of Fairmont, Barb Ekeler of Lincoln and Edwin and Lavonne Duer of Staplehurst. He is also survived by his aunts and uncles Andrew (Alissa) Schick of Richardson, TX, Aimee (Ryan) Eckstein of Elkhorn, NE, and Kelly Naber of Lincoln.

Aydan is preceded in death by his great grandparents, Merlin Ehmen, Alfred Ekeler, and Harlan and Mildred Naber.
A Mass of Christian Burial will be held 10:00 AM, Friday, November 3,2017 at St. Stephen’s Catholic
Church, Exeter with the Reverend Father Steven Thomlison officiating. Interment to follow in the Exeter Cemetery.