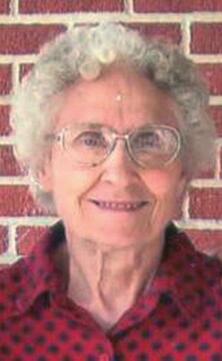 Arlene M. Ediger, age 92 of Henderson, died peacefully, Monday, July 31, 2017 at the Henderson Care center. She was born June 16, 1925 in Moundridge, Kan. to Jacob S. and Mary (Goering) Kaufman. She went to country school close to her home, and was baptized in the Faith of taking Jesus Christ as her Savior at a very young age. Arlene graduated from Moundridge High school in 1943 and then graduated from Bethel College, North Newton, Kan. She then taught school in Moundridge rural schools for four years.

On Feb. 11, 1951, Arlene was united in marriage to Henry W. Ediger at the Eden Mennonite Church in Moundridge. Arlene was a homemaker and also secretary at Grace Children’s Home for 15 years. She was a member of the Community Bible Church in Lushton, where she sang in choir and quartet, was a member of the Women’s Circle, and in general, enjoyed volunteering at the church. She enjoyed reading her devotions, quilting and sewing, gardening, and cooking. She was always excited to babysit for many people in the community and helping organize large family reunions, and loved watching sporting events, especially baseball.

Graveside services will be held at 1:30 p.m., Thursday, Aug. 3, 2017 at the Faith Evangelical Bible Cemetery, 1 mile south of Henderson. Memorial services will follow at 2:30 p.m. at the Community Bible Church in Lushton with the Reverend Solomon Adams officiating. Visitation will be held on Wednesday, Aug. 2, 2017 from 1-9 p.m., with the family greeting friends from 7-9 p.m. that evening at the mortuary in Henderson. Memorials may be directed to the Henderson Care Center or to the family for later designation.
​
Metz Mortuary, Henderson is handling arrangements.
Condolences may be emailed to Metz Mortuary Messages will be given to the family.
Find our featured Mortuary in Family Services, Funeral Services and Grievance Services featured as a York, Nebraska Business in York Marketplace.
Location: Metz Mortuary | 109 South Lincoln Ave | York, Nebraska 68467 | Phone: 402-362-3351