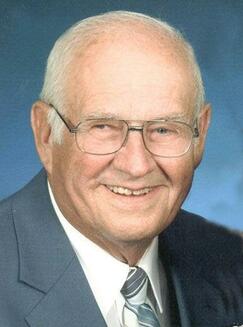 Ardean was born June 13, 1937 in Bradshaw to Richard A. and Hulda (Opfer) Kohtz. Raised on a farm outside of Bradshaw, Ardean was baptized, confirmed and attended parochial school at Zion Lutheran Church in Hampton. Upon graduation from Bradshaw High School in 1955, Ardean began farming and had a Grade A Dairy farm. On Jan.12, 1957, he married Mary L. Smith in Stromsburg and the two later relocated to York. After moving to York, Ardean was owner of a gas station and a meat cutter at the York packing plant. Ardean was forced to retire from meat cutting after becoming legally blind, and then he became involved in real estate and owned four laundry mats before retiring in 1993.

Ardean was an active member of the Lions Club for over 35 years. During his years as a Lion Ardean served on many boards and positions, which included but are not limited to: being a member of the Lion’s Nebraska Foundation Board, serving on the board’s cabinet and serving on Omaha’s Eye Bank Board. Ardean was awarded the Melvin Jones Fellow Award, the highest honor bestowed on to Lions members. Ardean was also active in the League of Human Dignity and the VIPS Club. He participated in the University of Iowa Research Study on Juvenile X-Linked Retinoschisos. In addition to traveling with his fellow Lions Club members, Ardean enjoyed fishing, boating and bowling with his wife, children, grandchildren and great-grandchildren.

Left to cherish Ardean’s memory is his wife of 57 years, Mary of York; and five children, Jim (Julie) Kohtz of Milford, Susan (Kevin) Clark of McCool Jct., Judy (Marc) Ronne of York, David Kohtz and significant other Carla Nelson of York and Lisa Johnson of York.

Ardean is also survived by his brother, Stanley (Dorothy) Kohtz of Denver, Colo.; sisters-in-laws, Maxine Peterson of York and Grace Quiring of Henderson; nieces, nephews and a host of friends. Additionally, Ardean held a special place in his heart for his dog, Buddy.

Ardean was preceded in death by his son Gary Alan Kohtz, parents and three brothers, Harold, Ray and Marvin.

Funeral services will be at 2 p.m. Monday, Nov. 24, 2014 at Emmanuel Lutheran Church in York with the Reverend Mike Neidow officiating. Interment will be in Zion Lutheran Cemetery in Hampton. Visitation will be from 1-9 p.m. Saturday and Sunday at the Metz Mortuary. The family will be present to receive friends from 6:30-8 p.m. Sunday evening. Memorials may be directed to the family for later designation. ​