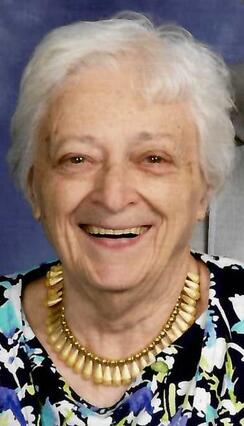 Anne Marie Olson, age 87 of Kearney, NE formerly of York, NE died Monday, December 12, 2022 at Kearney. She was born August 12, 1935 in Providence, RI to Joseph and Mary Grace (Ferragamo) Granieri.  Anne was married to Leslie Olson on June 15, 1958 in Framingham, MA having been married for over 61 years. She was an active member of St Joseph Catholic Church in York, volunteered for Meals on Wheels, St Joseph Catholic Daughters, St Joseph Altar Society, the Women’s Choir and also volunteered at the York General Hearthstone for over 20 years. Anne was a member of the York American Legion Auxiliary, York General Hospital Auxiliary and the Yorkshire Playhouse. She was also very active in the York County Republican Party, enjoyed playing cards, gardening, spending time with her grandchildren, bird watching and was a volunteer at the American Red Cross Mobile Blood Bank.

She was preceded in death by her parents, husband and her brother Joseph.

​A Mass of Christian burial will be held 10:00 am Saturday, December 17, 2022 at St Joseph Catholic Church in York with the Reverend Father John Sullivan officiating.  Burial will take place in St Joseph Cemetery east of York. Visitation will be from 1-8:00 pm Friday at the Mortuary in York with her family greeting friends that evening from 5-6:30 followed by a rosary service at 6:30 pm. Memorials may be directed to St Joseph Catholic Church.