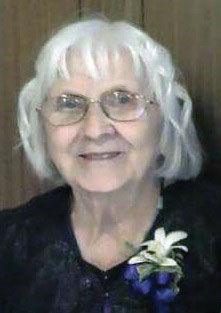 She was born Nov. 11, 1922 in Henderson to Henry and Katharina (Rempel) Regier. Anna married Delmer Hoover on July 12, 1944, and to them three children were born, James, Julie and Jerry. She was a member of the United Methodist Church in York and enjoyed crocheting, listening to music, and especially enjoyed spending time with her grandchildren.

Anna was preceded in death by her husband; parents; one sister; five brothers and son-in-law, Dave Claussen.

Funeral services will be held 10 a.m. on Saturday at the United Methodist Church in York, with the Reverend Art Phillips officiating, with burial following in the Friesen Cemetery, which is 2 miles west of Henderson. Visitation will be held Friday from 1 – 9 p.m. at the mortuary, with the family greeting friends from 6:30 – 8 p.m. Memorials may be directed to the family for later designation.  ​