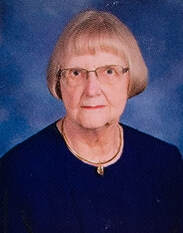 Ann M. Eddy, age 85 of York, NE, died Wednesday, October 26, 2022 in York. She was born on October 1, 1937 to Fred J. and Bernice (Stander) Marquardt in Avoca, NE. She graduated from Avoca High School and completed a BA in Psychology at the University of Nebraska Omaha. On August 23, 1959, she was united in marriage to Dennis Eddy in Avoca, NE.

Ann and Dennis lived in Plattsmouth and Omaha, NE, before relocating to Illinois where they lived many years before settling in York, NE in 1999. She was a long-time member of the First Presbyterian Church in York. Ann belonged to the York Garden Club and sat on the Patient Advisory Board for the York General Hospital. She was a strong supporter of Kilgore Memorial Library and Yorkshire Theater. She loved finding out when friends and family birthdays were to surprise with them with birthday cards with a tea bag inside. She enjoyed crafting including basket making and needlework, especially counted cross stitch, and loved to cook and bake for others. She thoroughly enjoyed traveling to Puerto Rico, Mexico, and Italy with Dennis, and later going to Germany, China, England, Denmark, Iceland, Sweden and San Francisco with her daughter and son-in-law.

Ann is survived by her daughter Erica Eddy and husband Stu Hansen, and many friends and relatives spread across the country. She was preceded in death by her husband Dennis and her parents.

Memorial services are scheduled for 10:00 a.m., Thursday, November 3, 2022 at the First Presbyterian Church in York with the Reverend Mike Eickhoff officiating. Ann has donated her body to the Nebraska Anatomical Board for medical education and research. No viewing or visitation. Memorials may be directed to the Kilgore Memorial Library in York or the First Presbyterian Church. ​