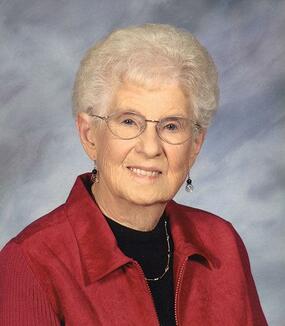 She was born Dec. 25, 1923 in Henderson to Gerhard and Katharina (Friesen) Friesen. Amy was an elementary school teacher for 28 years in the Henderson area and belonged to the Bethesda Mennonite Church. On May 22, 1945, she was married to Roland A. Friesen at Henderson and to them three children were born: Jerry, Lynn and Jeanne.

Amy was a founding member of the Heritage Park Board and Happy Homemakers Club in Henderson. She served on the Hospital Auxiliary League, along with being an avid volunteer at Henderson Health Care. Amy loved researching family genealogy, writing family stories, quilting, sewing  and traveling.

She is survived by two sons, Jerry (Carol) Friesen of Newton, Kan. and Lynn (Mary) Friesen of Windsor, Colo. and a daughter, Jeanne (Dick) McClemens of Kearney. Amy is also survived by seven grandchildren; 12 great-grandchildren; sisters-in-law, Martha Friesen of Fargo, N.D. and MayBelle Janzen of Tucson, Ariz. along with many nieces and nephews.

She was preceded in death by her parents;  husband; five brothers and two sisters.

Graveside services will be held at 9:15 a.m., Saturday, March 4, 2017 at the Bethesda Mennonite Cemetery north of Henderson with the Reverend Jim Voth officiating. Memorial services will follow at 10 a.m., Saturday at the Bethesda Mennonite Church in Henderson. Visitation will be held from 1 - 9 p.m. on Friday at the mortuary in Henderson, with her family greeting friends from 7-8:30 p.m. later that night. In lieu of flowers, memorials may be directed to the Heritage Park in Henderson.​