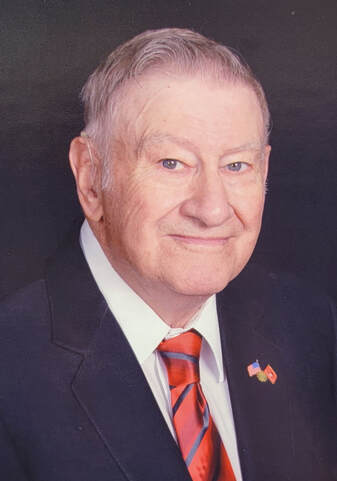 Bud proudly served our country as a member of the United States Marine Corp at Camp Pendleton in California. He was a long-time member of the McCool United Methodist Church. He served many years on the McCool Junction School Board. He was a 4-H leader and was on the York County Fair Board, and took care of the 4-H building at the York County Fairgrounds and was active in the Fair’s free watermelon feeds. Bud attended his children’s and grandchildren’s events and enjoyed 50 years of attending livestock shows. He was honored by the York County Cattleman’s Association for his commitment to the cattle industry. He enjoyed watching sports, especially the Nebraska Huskers and the KC Chiefs.

He was preceded in death by his wife Barbara and his parents.

Funeral services are scheduled for 10:00 a.m., Thursday, May 19, 2022 at First United Methodist Church in York. Interment with military honors will follow at Greenwood Cemetery in York.  Visitation will be held from 1-8 p.m. on Wednesday, with the family greeting friends from 6-7:30 p.m. at Metz Mortuary in York.  Memorials may be directed to the family for later designation. ​
​
​Condolences may be emailed to Metz Mortuary Messages will be given to the family.
Find our featured Mortuary in Family Services, Funeral Services and Grievance Services featured as a York, Nebraska Business in York Marketplace.
Location: Metz Mortuary | 109 South Lincoln Ave | York, Nebraska 68467 | Phone: 402-362-3351