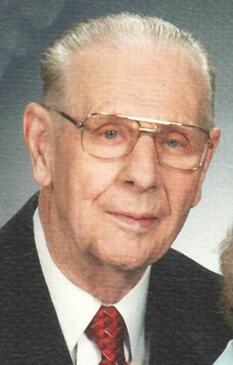 He was born Dec. 14, 1919 at Waco to Carl A. and Clara (Wellman) Apetz. Alvin attended elementary school at St John’s Lutheran School at Waco, NE and graduated from Waco High School in 1938.

In February 1942 he enlisted in the United States Army where he served in the 144 Infantry Regiment in Oregon, California and North Carolina. He was stationed in Boston when he was assigned for Overseas Replacement in 1944, where he joined the IV 4+4 Infantry Division in France.

He was wounded in action in May of 1945. He was honorably discharged in October of 1945 at Fitzsimons Hospital at Denver, Colo. and awarded the Purple Heart. Alvin worked in the area York from 1945 – 1982 as a construction foreman. A longtime member of Emmanuel Lutheran Church in York, he served on many boards and committees and was also an Elder for several terms. Alvin enjoyed serving as a Scout Master for Boy Scouts of America Troop 170, which was sponsored by Emmanuel Lutheran laymen’s League.

He is survived by his sister, Darlene Senff of York; sister-in-law, Wanda Apetz of York and several nieces and nephews. He was preceded in death by his parents; wife; two brothers; one sister and a nephew.

Funeral Services are scheduled for 10 a.m. Friday, May 6, 2016 at Emmanuel Lutheran Church in York with the Reverend Mike Neidow officiating. Burial will take place in St John’s Cemetery south of Waco. Visitation will be held from 1 – 9 p.m. on Thursday, May 5, with family greeting friends that evening from 6:30 – 8 p.m. at the mortuary. Memorials may be directed to Emmanuel Lutheran Church.
​
Condolences may be emailed to Metz Mortuary Messages will be given to the family.