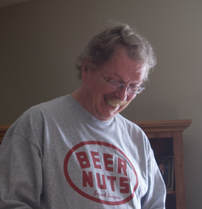 Allison “Buck” Raymond Dougherty Jr., age 70, passed away February 28, 2018 at home in York, NE. After being diagnosed with small cell lung cancer in late December, he had been battling failing health since January.

Buck was born December 13, 1947 in Falls City, NE to Allison Raymond and Katherine (Mehring) Dougherty Sr. He was born prematurely and was reported to be the smallest baby born in Falls City, NE at just 2 pounds and 9 ounces. Due to his premature birth, Buck was hearing impaired. He attended school in York and graduated from York High School in 1966. Buck played football as a tackle all four years of high school. In his senior year he was a starting tackle and was honored by being selected for the All-State team and the Shrine Bowl. Upon graduating high school, he continued to play football for Peru State College, his father’s alma mater.

Buck was in the first group of employees to be hired at Sundstrand Aviation in 1981. He worked with Sundstrand through two name changes and retired in 2013. Buck enjoyed playing softball for the company league and playing golf. He liked to travel to visit his daughters and enjoyed spending time with his grandchildren. When Buck was not traveling, he enjoyed reading and visiting with dear friends Ron and Pam.

​A celebration of life service is scheduled for Saturday, March 10, 2017 at 2 p.m. to 4 p.m. at Metz Chapel. Beginning at 2 p.m., Jerry Kreps will share some memories, then the family will greet friends. Buck wished to be cremated so there will be no internment. Memorials may be directed to York-Adopt-A-Pet.