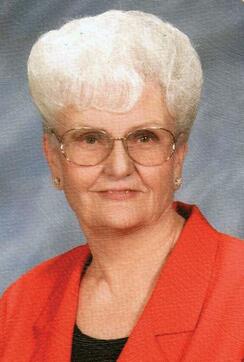 Adell Marie Eichman was called to heaven on July 4, 2015 after a long struggle with Alzheimer’s.

Adell was a kind and generous woman who never met a stranger. She had a way of making anyone she met feel comfortable and at home. During the journey even as her memory was fading she continued to touch the hearts of others.

Adell had three passions in her life. Her family and friends, her faith and her love of sports. Adell loved her grandchildren. They were the most important people in her world and she would do anything for them. She taught them the importance of faith and it was not uncommon to see one of them accompany her to church when she could no longer go alone.

Even when she no longer knew her family by name her faith stayed strong. Even in the very end when she could no longer communicate she responded to prayers and hymns that were played in her room to calm her.

Adell was one of the greatest Nebraska Cornhusker fans no matter what the sport. Her favorites, though, were football and volleyball. Adell knew every player by name current and past. If you needed to know something about Nebraska football ask Adell.

Her daughters grew up knowing that Nebraska Football days were special days and you never ever sat next to her during a game if you didn’t want to walk away bruised by her excitement. She also loved her New York Yankees in the summer time. She would cheer for the Royals as the local team but when the two were playing each other the Yankees were her team.

Adell was born April 16, 1936 to her parents, Martha Marie (Naber) and Christian Hillmer in Lushton.  She, her parents and brother, Roger, lived in the big white house at the end of Lushton’s main street until moving to the farm east of York.

Adell graduated from York High School. She then went to the University of Nebraska Kearney (then known as Nebraska State College-Kearney), graduating in 1958 with a Bachelor’s degree in Education as a Physical Education Teacher. On June 15, 1958 she married Raymond Eichman at Emmanuel Lutheran Church in York. For the first few years of their marriage they traveled as Ray worked for a construction company. They eventually settled in York. Adell was Ray’s partner in everything they did from the farm to the construction company that they ran together.

When Ray’s health changed Adell began her work at Epworth Village as the administrative secretary. She worked at Epworth for 17 years. Adell was not one to let grass grow under her feet. While at Epworth she and Ray started a transportation company which transported children to and from school and treatment programs. After Ray’s death in 2003, Adell expanded R&A Transport services to transporting individuals across the state of Nebraska. Helping people was always important to Adell, she stayed actively involved in the company until the Alzheimer’s disease took her memory.

Adell was a member of Faith Lutheran Church.

She was preceded in death by her parents; brother, Roger Hillmer; husband, Raymond and daughter Raylene Lawson. Participants in Adell’s funeral are encouraged to wear RED in celebration of her life and love for the Cornhuskers.

Funeral services are scheduled for 2 p.m., Wednesday, July 8, 2015 at Faith Lutheran Church in York with the Reverend Heath Trampe officiating. Burial will be in York’s Greenwood Cemetery. Memorials may be directed to the Alzheimers  Foundation or to the York General Hearthstone. Visitation began after 5 p.m. on Monday evening. Adell’s family will greet friends Tuesday evening from 6:30 – 8 p.m. also at the mortuary.   ​