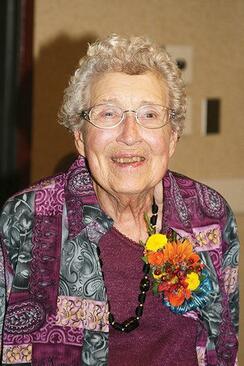 She was born to Ernst and Alvina (Kraft) Meyer on Oct. 20, 1921, near Chester. Adelia graduated from Chester High School in 1938 and attended Peru State College before moving to Hebron in 1942, where she married Stuart Albert Schepers on Feb. 18, 1945. Adelia worked with him in their Geneva grocery store until they moved to a farm north of Shelton in 1947.

Adelia and Stuart moved from the farm into Shelton in 1976. Stuart passed away in 1998. In July 2012, Adelia moved to York where she resided at the York General Willow Brook until her death.

Adelia was preceded in death by her parents; two brothers; two sisters and her husband, Stuart.

Survivors include five children; 16 grandchildren and their spouses; 19 great-grandchildren; nieces and nephews; residents and staff of Willow Brook; friends and her faithful companion “Kitty.”

A Celebration of Life service will be held at 11 a.m. Saturday, April 2, 2016 at St. Paul’s Lutheran Church, Shelton, NE, 705 A Street, with Pastor Mike Neidow. Inurnment will take place at the Fairmont Cemetery later that day. In lieu of flowers, memorials may be directed to St. Paul’s Lutheran Church-Shelton or Shelton Public School Scholarship Fund (Cornerstone Bank). Cremation, no viewing.  ​