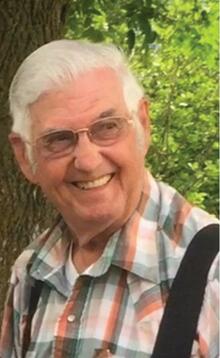 He was born March 4, 1933 in York to Ernest and Elizabeth (Koester) Gerken. Hubert was baptized in 1933, and later confirmed at Emmanuel Lutheran Church on May 22, 1947 and graduated from York High School in 1952. After completing his education he was married to Connie Lea Charlton on Oct. 12, 1952 at Peace Lutheran Church, Waco. To this union five sons were born, Michael, Stanley, Brian, Keith and Richard.

Hubert was a longtime member of Emmanuel Lutheran Church of York, member of the York Cattleman’s Association, York Sports Coach and the York Trail Riders. Hubert was a longtime York County farmer, along with working at Champion Home Builders and Pflug Grain Company. Hubert served his country for six years in the Army National Guard. He especially loved his family, and was very proud of all of them.

He is preceded in death by his parents; first wife, Connie and his infant brother, Leland; mother-in-law; father-in-law; sister-in-law, Donna Charlton Westwood; brothers-in-law, Alan Stephen, Don Westwood and Gary Charlton and two nephews.
​
Funeral services are scheduled for 10 a.m., Thursday, July 6, 2017 at Emmanuel Lutheran Church in York with the Reverends Mike Neidow and Ben Kaiser officiating. Burial with full military honors will follow at the Greenwood Cemetery in York. Memorials may be directed to the family for later designation. Visitation will be held between the hours of 1 – 8 p.m. Wednesday July 5, 2017, with the family greeting friends from 6 – 8 p.m. that evening at the mortuary in York.