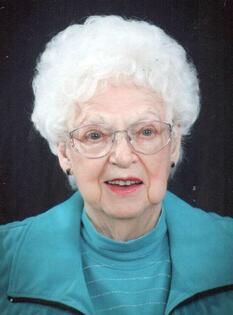 Dorothy was born Sept. 11, 1917, to John Oliver and Mable Tucker Hager at the farm home in York County five miles southwest of McCool Junction. She was raised on the family farm and received her elementary education in a one room schoolhouse, District #4, York County and graduated from York High School in 1934.

York High School provided a normal training program for one-room schoolhouse teachers. At age 17, Dorothy taught for three years to students Grades 1-8 in a one-room schoolhouse, District #6, York County, south of Waco. She was united in marriage to Donald Moore Byrnes on May 28, 1937. They were married for 62 years living their entire married life in York until Don passed away in April 2000.

Dorothy served as a bookkeeper/secretary during her work career. After raising two boys, she worked as bookkeeper for the York Milling and Elevator and was employed by the York Public Schools three years (1955-58) as Secretary at Edison Elementary and then 26 years (1958-1984) Secretary to the Principal at York High School retiring in 1984.

Dorothy loved all sports and followed her favorite teams and players, especially the Nebraska Cornhuskers and the Kansas City Royals. She attended a football game in Memorial Stadium on her 87th birthday. Family, cooking/baking and completing at least two crossword puzzles daily were favorite activities. After hip surgery in 2012, Dorothy’ moved to Lincoln and lived at Legacy Terrace until her death.

Services will be at 11 a.m., Monday, Nov. 2, 2015, at First Presbyterian Church, 414 Delaware Avenue, York, Nebraska. Reverend Michael Eickhoff will officiate. Burial will be in the Greenwood Cemetery in York. Visitation will be from 2-9 p.m. Sunday with the family greeting friends from 2-4 p.m. that afternoon at the mortuary.