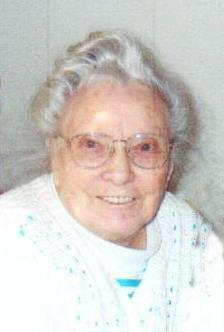 She  was born October 6, 1920 to Harry and Minnie (Crawford) Hartland near Enid, Montana.  Blanche married Herman Keller June 2, 1940.  They farmed different places in Montana and finally bought a farm in the Elmdale community where they lived most of their life. The fall of 1974 they moved to Sidney. Herman passed away in the spring of 1984 and Blanche continued to live there until December of 2008 when she moved to an assisted living home in York, NE to be near a daughter.

She enjoyed gardening and canning the produce. She also raised turkeys and chickens.  Blanche enjoyed large family gatherings and always wanted to feed people who came to her home. She was a 4-H leader and Bible school teacher. Blanche loved to sew, tat and crochet.

Funeral services are scheduled for 2 p.m. Tuesday, January 6, 2015 at the Metz Chapel in York. Burial will in the Mona Cemetery in Richland County MT at a later date. Memorials may be directed to the Mountain States Children’s Home in Longmont, Colo. Visitation will be from 1-9 p.m., Monday at the mortuary with the family greeting friends from 7-8 p.m.
​
Condolences may be emailed to Metz Mortuary Messages will be given to the family.